A protective layer of fluoride can increase the stability of perovskite solar cells significantly, writes an international research collaboration in the leading journal Nature Energy.

The finding by scientists from DIFFER, Eindhoven University of Technology, Peking University and University of Twente holds much promise for the future of perovskite solar cells. Perovskite is cheap, easy to produce and almost as efficient as the traditional solar cell material silicon. However, perovskite degrades quickly, severely limiting its efficiency and stability over time. With an added fluoride layer, the researchers found that their cells retain 90 percent of their efficiency after 1000 hours operation at various extreme testing conditions.

Because they are so cheap to make, perovskite solar cells have been at the center of much recent solar research. As a consequence, their efficiency has risen from less than 4 percent in 2009 to over 24 percent at present, which is close to traditional silicon cells. So-called tandem cells, which combine silicon and perovskite cells, achieve an efficiency of more than 28 percent.

Despite this success, perovskite has a number of defects due to the nature of the material and the way it is manufactured. Over time, vacancies in the atomic structure of the metal halide trigger the degradation of the perovskite under the influence of moisture, light and heat.

The researchers in Eindhoven, Twente and Beijing have experimented with a new type of perovskite, by adding a small amount of fluoride in the production process. Just like fluoride in toothpaste, the fluoride ions form a protective layer around the crystal, preventing the diffusion of the harmful defects. 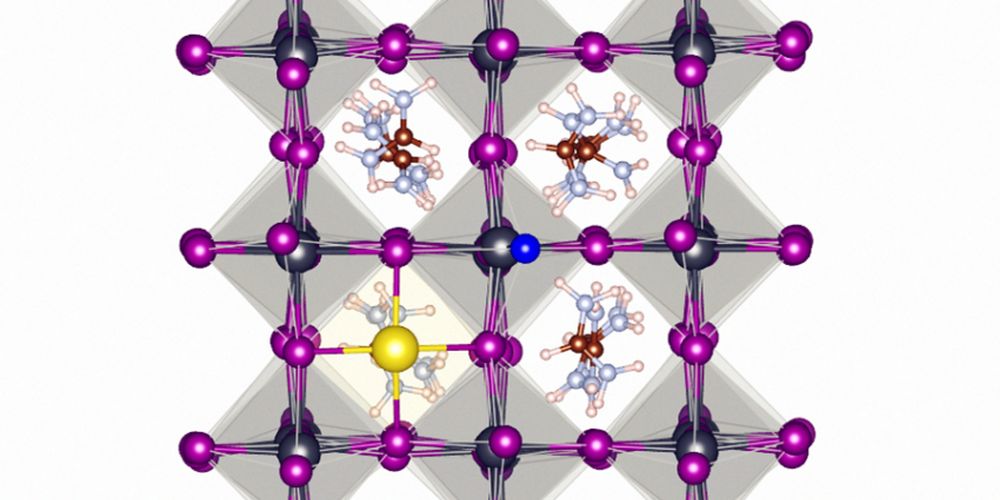 The atomic structure of fluoride (NaF) containing metal halide perovskite (FAPbI3). Due to its high eletronegativity, fluoride stabilizes the perovskite lattice by forming strong hydrogen bonds and ionic bonds on the surface of the material. (Image Eindhoven University of Technology)

‘Our work has improved the stability of perovskite solar cells considerably,’ says Shuxia Tao, assistant professor at the joint DIFFER / TU Eindhoven Center for Computational Energy Research (CCER), and co-author of the paper. ‘Our cells maintain 90 percent of their efficiency after 1000 hours under extreme light and heat conditions. This is many times as long as traditional perovskite compounds. We achieve an efficiency of 21.3 percent, which is a very good starting point for further efficiency gains.’

Much of the work of the team from Eindhoven has gone into explaining why fluoride is such an effective ingredient compared to other halogens. Using computer simulations they conclude that part of its success is due to the small size and high electronegativity of fluoride ions. The higher the electronegativity of an element, the easier it attracts electrons of neighbouring elements. This helps fluoride ions to form strong bonds with the other elements in the perovskite compound, forming a stable protective layer.

The study is seen as an important step towards the successful implementation of perovskite solar cells in the future. However, much work remains to be done. The gold standard in the solar industry is a retention rate of at least 85 percent of original efficiency after ten to fifteen years, a standard which is still some way off for perovskite cells. ‘We expect it will take another five to ten years for these cells to become a commercially viable product. Not only do we need to further improve their efficiency and stability, we also need to gain a better theoretical understanding of the relevant mechanisms at the atomic scale. We still don’t have all the answers to why some materials are more effective than others in increasing the long-term stability of these cells,’ says Tao.